If correlations between pieces of test equipment are to be made, it is vital that all parameters of the test method be exactly the same. Typical parameters of ASTM F1140 testing may include, but are not limited to, package size, material, seal configuration, test equipment, rate of air flow into the package, sensitivity (machine response to pressure drop), and position of test article.

ASTM F1140 testing is comprised of the following:

Note 1: The sample is inserted in the test clamp and is left unsupported and untouched during testing. 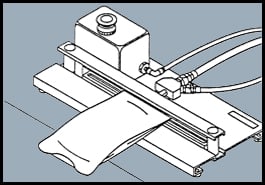 Note 2: The sample is inserted in the test clamp and is held firmly enough to keep the package horizontal, sealed and straight during inflation without putting undue pressure on the seal. This technique limits curling of the pouch, which may affect test results. This technique requires training for repeatability. 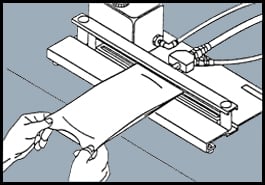 Note 3: The sample is inserted in the test clamp and is left untouched during testing, but supported underneath. 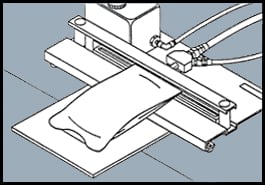 In the Burst Test, air is introduced into the package at a predetermined pressure and flow rate. The porosity (or lack thereof) of the package material determines the inflation rate for the burst test. Because air escapes through the walls of a porous package during inflation, the flow rate must be increased to compensate for the lost air through the walls and create the back pressure in the porous package. This pressure creates the force needed to rupture the seal.

In the Creep Test, a whole package is inflated to a constant pressure, which is then held for a specified time, resulting in a pass / fail result. The Creep Test provides a test for slow shear of the adhesive bond similar to a dead weight hanging on the seal.